I know for many of us here in the Northeast, there has been wondering whether spring would ever arrive. But of course it does and has been, slowly, beneath the threshold of our awareness, shoots pushing against the gradually softening earth, finally breaking through to the light. I find it humbling in being aware of how much I miss. That no matter how attentive I am, that even if I sat and observed a fern frond all day, I would miss the infinitesimal changes as it unfurled.

And so yesterday morning, I set out in search of the spring ephemeral wildflowers. Aptly named for their transitory nature and appearing between the last snow melt and full leaf out. At first glance, it appears not much is happening on the wooded slope where I first stop, but then, here and there, mayapple, bloodroot and crimson red trillium take center stage, standing in dramatic contrast to the quieter and more subdued tones of blue cohosh.

Kneeling on the forest floor surrounded by oaks and hemlocks, time seemed to slow as I became absorbed by the play of light and shadow, illuminating textures, accentuating the curve of a leaf or revealing some aspect previously unnoticed.  At one spot, I came across a tiny red eft, a bright splash of orange traversing under and through the abundant leaf litter. In having just seen a newt in our pond, I couldn’t help wondering how the world looked to this little critter, who having shed his gills would be a land dweller for the next few years before returning again to the watery world. Moving slowly, the eft was very accommodating and I got some wonderful close-ups, one of which I’ve included below: 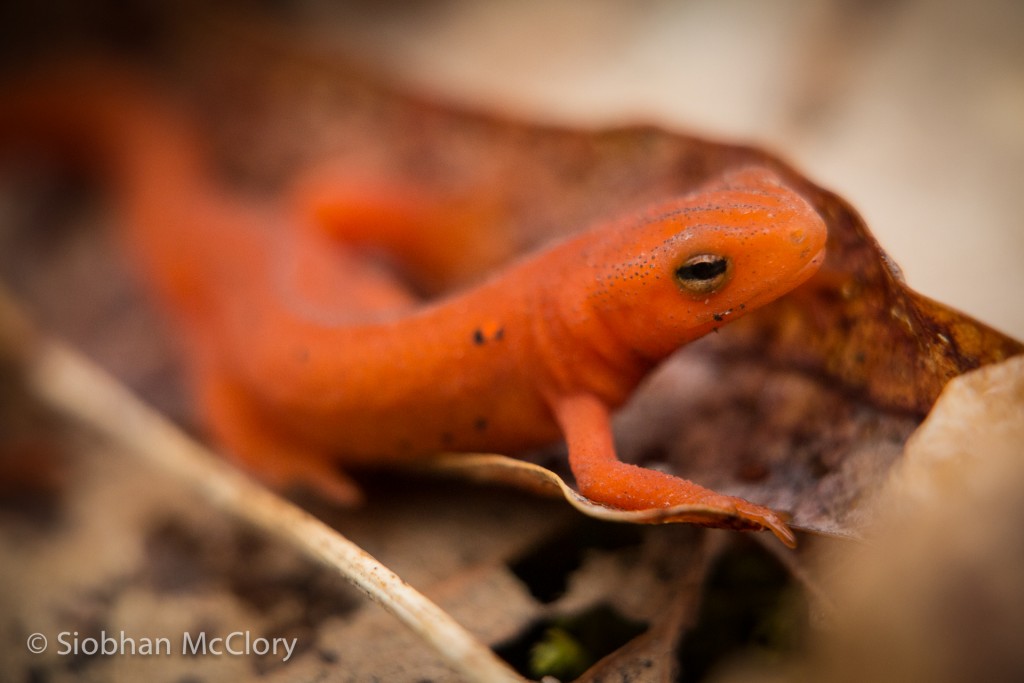