Robin Song – A Celebration of Gratefulness

Once again the robins sing,
A hint of snow still on the bough.
Treetops all around me ring …
With gratefulness, I hear them now.

Each spring around the middle of March, the robins return to my home in upstate New York. A male invariably takes up residence in my backyard and proclaims his territory each day at first light. Most mornings, he sings from high in a nearby aspen tree, his silhouette clearly visible against the brightening sky. His sweet twilight song drifts-in through my bedroom window … a cheerful and soothing elixir that gently rouses me from sleep and draws me into the dawning day. 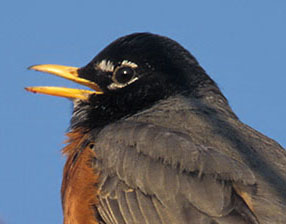 I have been listening to robins for nearly seventy years, yet I never tire of their music. They sang from tall trees in my yard when I was a child in Missouri. They sang in city parks in Maryland when I was a graduate student. During vacations, I encountered them in the mountains of California and Arizona. While on recording trips of recent years, I heard them in the northern forests of Quebec, Manitoba, and even Alaska. Truly, the robin is a quintessential North American bird, a species whose song is familiar and dear to nearly everyone who pays attention to the sounds of nature.

So let us take a moment to celebrate all robins and be grateful that they accompany us on our life journeys, that our natural surroundings continue to support healthy populations, and that our lives remain graced by their delightful and melodious songs.

NOTE: When singing in the twilight of dawn and dusk, a male often includes numerous soft, high-pitched phrases that sound like hisselly, or some variation thereof. At times, the singer may give a long series of such phrases, punctuated here and there by louder whistles. Some refer to this as “whisper song.” One can’t help but wonder what all the whispering is about, but its exact meaning in the life of the robin is not currently known. The following recording, which I made early this morning (April 7), demonstrates this interesting “whisper song” behavior: