Among the most amazing rites of spring is the territorial and courtship “drumming” display of the male Ruffed Grouse, a chicken-like bird of hardwood and mixed forests in northern and mountainous areas (see range map below).

Especially during the hour before dawn, the male perches atop a log or stump and periodically beats his wings into a mad blur, producing a series of very low-pitched thumps that start out slow but quickly speed up, like an old, one cylinder tractor engine starting up in the distance. The thumps are very low-pitched and some people have trouble hearing them. They are also difficult to locate. Quite often, the drumming grouse is much closer than expected, and when approached will suddenly burst from its perch and flutter away.

Early naturalists were impressed, and presumed that the thumps resulted from the beating of the wings against the breast. But studies revealed quite a different explanation: during each beat, when the wings are quickly drawn outward, a vacuum is created, and a thump is produced when air suddenly rushes-in to fill the vacuum. Receptive females hear the drumming and approach the male to mate. Ruffed Grouse do not form lasting pair bonds. The female leaves the site immediately after mating and the male will readily mate with a different female if one approaches. Females subsequently lay eggs in shallow depressions that they make directly on the ground.

While most Ruffed Grouse avoid humans, there are some that are clearly attracted. Such “fool hens” may actually approach humans in full courtship display, and sometimes may even chase after the object of their amour, pecking at feet as part of the fun.

1. Especially during the spring breeding season, males “drum” from logs or stumps (depicted in video and explained above):

3. When threatened by a predator, female’s with young will feign a broken wing and give squealing calls, while leading the predator away from the chicks (which freeze and blend into the ground cover):

5. When flushed, flies away with a startling whirr of the wings:

If you live in Ruffed Grouse territory, you may occasionally encounter one crossing a road, or else startle one while you’re out walking in forested areas (where the grouse will suddenly flush with a mad whir of its wings, startling you out of your daydreams).

For no obvious reason, some grouse act very friendly toward humans, approaching to within a few feet while ruffing out their feathers in full courtship display. “Fool hen,” you may say, and rightly so because this behavior has earned them that very name!

During the spring breeding season, when males predictably drum at dawn, it’s easy to home-in on their drumming logs, though you’re unlikely to actually see the behavior because the grouse will see you first and either fly or run. Here’s how to find a drumming log:

Arrive at a natural area before first light and go for a long walk on paths or lanes. Listen for distant drums and if you hear one, carefully walk closer until you’re a few hundred feet away (beware, though … it’s difficult to judge distance and you may get too close, flushing the grouse). Listen to a few drums and then determine a direction line to his perch. Then fan out to a different location and get another direction line. The position of the drumming log will be where the two lines cross! This is called “triangulation” and it works best if you get two direction lines that are at right angles to another.

Next, carefully walk toward where you think the drumming log is, keeping your eye out for movement and your ear out for sudden flight. At some point, the grouse will see you and either run or fly away. If it flies, you can quickly home-in to where you think it flushed, looking around for a likely perch (log, stump, or stone). Carefully inspect surfaces such as the tops of moss-covered logs, in hopes of finding fresh droppings, a sure sign that you’ve found the spot!

Well, if you’re an enterprising, highly-motivated individual, you might decide to erect a photographer’s blind (hide) or tent around thirty feet from the drumming log. Do this in late afternoon or early evening. Then go home for some sleep. Come back an hour or two before first light. With the help of a flashlight, walk as silently as possible to your tent and get inside, doing your best not to disturb the grouse if he is perched on the log. Then be quiet and wait. Hopefully, at around first light, you will hear him begin to drum. Finally, as dawn’s light arrives, you can peek out of a hole or slit in your blind, and enjoy the performance from your front row seat. But don’t immediately go running home to tell everyone … be patient, sip on some coffee, or take a nap, because it’s not good etiquette to leave your shelter until Mr. Grouse has called it quits for the day and exited the scene, which might be as late as mid-morning!

Yes, it can be a true challenge to get a good view of a Ruffed Grouse drumming … not an activity for faint-hearted, wimpy homebodies! But I assure you that working hard to get a glimpse of his performance will be well worth the effort, a once-in-a-lifetime, pristine, pure nature experience that will put you in same league as Thoreau and Muir and all the other famous naturalists of our time. 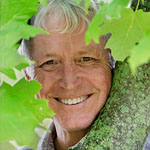 I obtained my video footage with the help of my friend Bob McGuire, by listening for drums at dawn in a conservation area near my hometown of Ithaca, N.Y. Together, we homed-in on a male’s drumming log located right next to a dirt road. Luckily, the male was fairly used to cars driving by and even the occasional jogger.

Over a two week period, I set up my photographer’s blind in three different locations, giving me very different views. One morning it was snowing when I arrived. I sat in the blind until first light, but he didn’t show up. Then, just as I was getting ready to leave, he suddenly popped up on the log and drummed with snowflakes falling all around. That is absolutely my favorite clip, even though the light was dim and the video a bit grainy.

My recording of the “quirt” alarm calls was obtained with some “trickery” involved. About twenty years ago, I found a drumming log and determined the direction he usually faced from the position of his droppings. Next I placed a good-sized mirror on a tree trunk about three feet away, positioning it so that he would see himself in the mirror at first light. The male showed up at the log around 3am and drummed happily for over three hours. Then, as dawn arrived, he finally caught sight of himself and totally flipped out, giving a long, excited series of “quirt” calls before taking flight. During all this, I was two hundred feet away in my car, sipping on coffee, and listening at the end of a long microphone cable. You can imagine my delight! 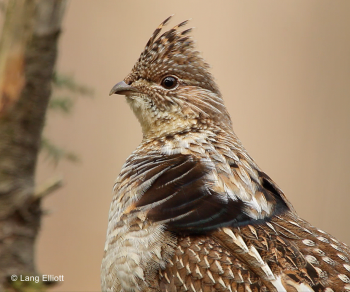 feathers on neck may expand into a “ruff” 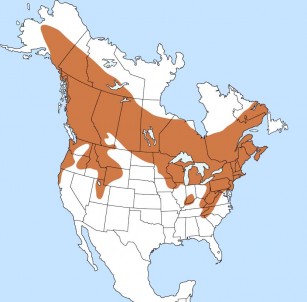 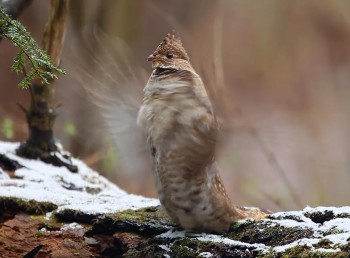 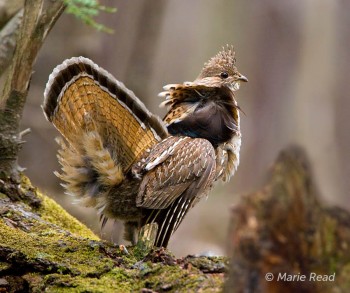 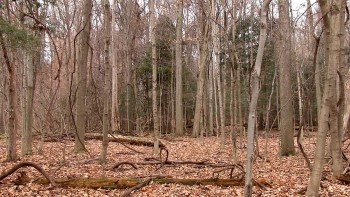 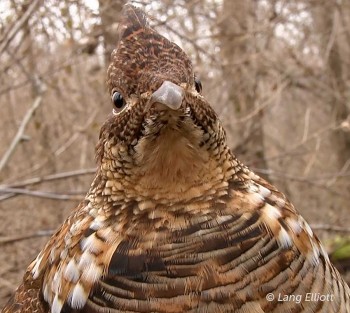 here’s lookin’ at you!