On May 2, air temperatures rose to around 70F here in upstate New York, and the American Toads migrated overland in mass to a nearby pond. The chorus of trills built in intensity through the day and by early afternoon, a full “mating frenzy” was in progress.

Dozens of males could be seen swimming about, excitedly searching for receptive females. At times, groups of males clumped together around a single female, each frantically trying to take hold of the female and kick his suitors away. Pairs in amplexus gathered in the shallows, often sinking to the bottom, both to avoid interference by other males, and also give females a chance to lay their long strings of eggs (which are fertilized by the male as they are being laid).

My goal for videography was to get better above-water footage of a “toad knot,” where a large group of males were all trying to mount the same female. Another goal was to get underwater footage showing behavior from a new perspective, and especially try for females laying eggs. I succeeded to a degree on both counts, though my egg-laying footage doesn’t include sections where one can actually see females forcing eggs out of their cloaca. Oh well, next year is only a year away … I’ll surely do better then!

All in all, the mating frenzy was quite an amazing spectacle, not only for the toads, but also for humans. The pond was next to a housing development, and parents and kids alike gathered along the shoreline, captivated by the show. One girl even swam to the chorus from the other side of the pond. As she floated offshore, males climbed on to her arm, clasping her skin in apparent delight. 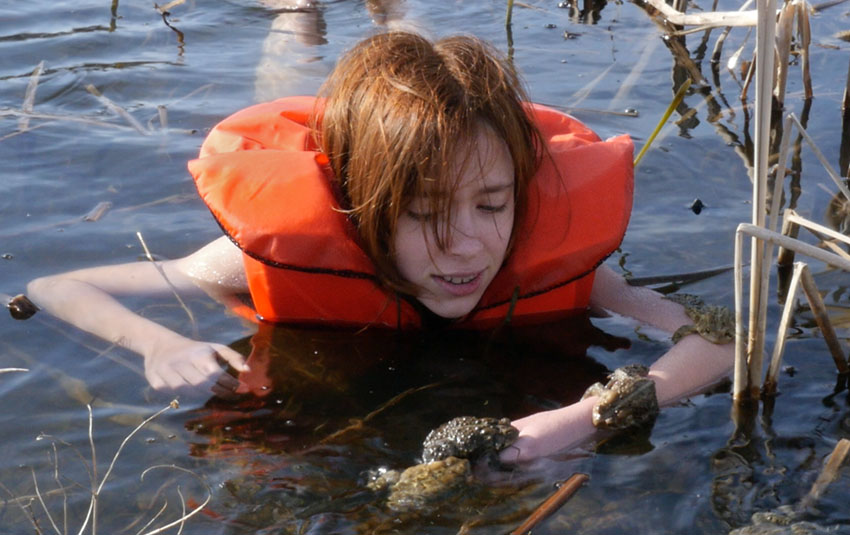 NOTE: The video soundtrack is unedited, recorded on-board the video camera and including a number of glitches (overloads, scratchy sounds during the underwater clips, etc.). In a final production, I will likely swap it with a more pleasing toad ambience.

For more videos and information about the American Toad, check out my American Toad – Dreamy Triller nature vignette.